This page can be viewed at http://www.historycommons.org/entity.jsp?entity=tim_mulvey_1

Tim Mulvey was a participant or observer in the following events:

March 18, 2010 and After: House Republican Leader: Democrat is ‘Dead Man’ for Voting in Favor of Health Care Reform 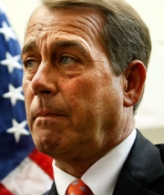 John Boehner. [Source: Slate]House Minority Leader John Boehner (R-OH) makes what some believe to be an implicit threat towards Representative Steve Driehaus (D-OH). Boehner, discussing Driehaus’s vote for the health care reform package, says Driehaus will pay a heavy price for his vote. “Take Steve Driehaus, for example,” Boehner says. “He may be a dead man. He can’t go home to the west side of Cincinnati. The Catholics will run him out of town.” After Boehner’s statement is publicized in the national media, Driehaus begins receiving death threats, and a right-wing Web site, The Whistleblower, publishes directions to his house urging readers to “protest” at his home. The headline of the article: “Tea Party Vows Revenge.” Driehaus’s press secretary Tim Mulvey releases a statement that reads in part, “This comes during the same one-week period that a right-wing special interest group published a photo of Rep. Driehaus and his children, the local Democratic Party headquarters in Cincinnati had a brick thrown through its front window, and Rep. Driehaus’s office received death threats.” Driehaus tells a reporter: “I’m very protective of my family, like most of us. There is no reason for my wife and kids to be brought into any of this. If people want to talk to me, if people want to approach me about an issue, I’m more than happy to talk about the issue, regardless of what side they’re on. But I do believe when you bring in a member’s family, that you’ve gone way too far.… Mr. Boehner made comments about me and my predicament when I go home which I felt were wildly out of bounds for his position and very irresponsible, quite frankly. He’s from next door [Boehner’s district adjoins Driehaus’s]. That’s not helpful. That’s irresponsible.” Shortly thereafter, Driehaus confronts Boehner on the floor of the House. “I didn’t think it was funny at all,” Driehaus will later recall. “I’ve got three little kids and a wife. I said to him: ‘John, this is bullsh_t, and way out of bounds. For you to say something like that is wildly irresponsible.’” According to Driehaus, Boehner did not intend to urge anyone to commit violence against him or his family: “But it’s not about what he intended—it’s about how the least rational person in my district takes it. We run into some crazy people in this line of work.” Driehaus will recall that Boehner is “taken aback” when confronted on the floor, but never actually says he is sorry: “He said something along the lines of, ‘You know that’s not what I meant.’ But he didn’t apologize.” (Costa 3/18/2010; Cincinnati Enquirer 3/24/2010; Sherman and Cogan 3/24/2010; Taibbi 1/5/2011) Republican Party chairman Michael Steele says of Boehner’s comments: “The leader does not condone violence, and his remark was obviously not meant to be taken literally. He is urging Americans to take the anger they’re feeling and focus it on building a new majority that will listen to the people.” (Sherman and Cogan 3/24/2010) Boehner says that when he called Driehaus a “dead man,” he was referring to Driehaus’s political career. (Talk Radio News Service 3/25/2010)