This page can be viewed at http://www.historycommons.org/entity.jsp?entity=tim_profitt_1

Tim Profitt was a participant or observer in the following events: 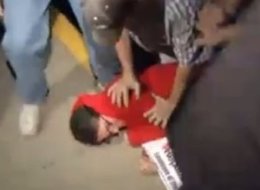 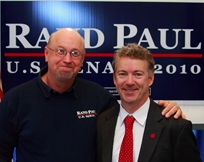 Former campaign coordinator Tim Profitt (left) stands next to Senate candidate Rand Paul (R-KY) in an undated photo. [Source: Think Progress]The Rand Paul (R-KY) Senate campaign takes out a full-page ad in the Lexington Herald-Leader. The ad features the names of several supporters, including Tim Profitt, the Paul campaign coordinator who stomped the head of a helpless woman at a debate the night before (see October 25, 2010 and After). (Barefoot and Progressive 10/26/2010) The Paul campaign will also refuse to return a $1,950 campaign donation made by Profitt. (Gerth 10/27/2010) Later, the campaign begins distancing itself from Profitt, who will be charged with assault in the incident (see October 26-29, 2010).

The man who stomped a woman’s head against the curb of a parking lot in the moments before a Senatorial candidate debate in Kentucky (see October 25, 2010 and After) calls for an apology from the woman he assaulted. Tim Profitt, a former campaign coordinator for the Rand Paul (R-KY) Senate campaign, is facing potential criminal and civil charges on behalf of the woman he assaulted, Lauren Valle. The campaign of Paul’s opponent, Jack Conway (R-KY), has called for Profitt to apologize. But Profitt tells a local television reporter: “I don’t think it’s that big of a deal. I would like for her to apologize to me, to be honest with you.” Profitt adds, “She’s a professional at what she does, and I think when all the facts come out, I think people will see that she was the one that initiated the whole thing.” Officials for MoveOn.org, the liberal advocacy group with whom Valle is affiliated, are outraged by Profitt’s position. MoveOn official Ilyse Hogan says: “I am offended and outraged by the words of Tim Profitt. Profitt said the attack was ‘not a big deal,’ that Lauren ‘instigated it,’ and that ‘she should apologize’—words that are eerily familiar to many women who have faced assault and abuse.” A spokesman for the Conway campaign, John Collins, says Profitt’s attempts to minimize the assault are inexcusable. “I think anyone who has seen the video could see that it was one-sided and that it was not a crowd-control problem but rather a sort of a mob, thuggish mentality of some of the Rand Paul supporters,” he says. Collins notes that the Paul campaign has not yet released the names of the two men that threw Valle to the ground and held her down as Profitt stepped on her, and continues: “Anyone who watched the video saw two men wrestle a young woman to the ground and then a third man, Profitt, come and stomp on the back of her head. I think the simple question we have is when is it ever okay… for two men to wrestle a young woman down to the ground, even without the stomping.” (Roxas 10/26/2010; Gerth 10/27/2010) Valle later refuses an apology. In an open letter to Profitt, she writes: “I have been called a progressive, a liberal, a professional agitator. You have been called a conservative, a Republican, a member of the tea party movement. Fundamentally and most importantly, you and I are both human beings. We are also both American citizens. These two facts, to me, are far more meaningful than the multitude of labels that we carry. And if these two facts are true then it means we are on the same team. I have not been for one moment angry with you and your actions. Instead I feel thoroughly devastated. It is evident that your physical assault on me is symptomatic of the crisis that this country is struggling through. And it seems that I will heal from my injuries long before this country can work through our separation. Only when we decide let go of our hate, our violence, and our aggression will we be able to communicate to each other about the issues that divide us. Right now, we are not communicating, we are stomping on each other. No one can ever win, no one can ever be heard, with violence. You and I, as fellow citizens, and we, as a country, have a choice. Either we choose to continue the cycle of inflicting violence upon each other, screaming at each other, insulting each other, and putting one another down or we find a way to sit down and start listening to each other. We’ll see how far we get. We are all viciously and vociferously feeding a fire that will only burn us down together. We must reach inside ourselves and make space for each other. We must forgive each other. We must believe in our capacity for transformation. The moment we choose compassion and reconciliation is the moment that we will begin to move toward freedom. There is no other way. I believe that you should be held accountable for your actions but I also recognize the incredibly negative impact that the consequences must be having on your life, and I wish you all the best as you yourself heal from this. Violence hurts everyone.” (McMorris-Santoro 10/29/2010) Profitt is charged with assault against Valle; he will plead not guilty, and his lawyer will claim that his assault was justified (see October 26-29, 2010).

Tim Profitt, a former campaign coordinator for Senate candidate Rand Paul (R-KY), admits to stomping the head of a protester after she attempted to be photographed with Paul at a recent campaign rally (see October 25, 2010 and After). Profitt has refused to apologize for his actions, and has suggested that his victim, Lauren Valle, owes him an apology (see October 26-29, 2010). Profitt and two other men affiliated with Paul’s campaign chased Valle when she approached Paul, threw her down, and stomped her head against the curb of the parking lot. Lexington police confirm that Profitt is the individual who stomped Valle: “Detectives identified the suspect involved in the assault as Tim Profitt,” according to a police statement. “Mr. Profitt is currently being served with a criminal summons ordering him to appear before a Fayette County District Court judge.” Valle has filed a fourth-degree assault warrant on Profitt. Profitt tells at least one local reporter that he used his foot to shove her head against the curb because his back problems make it difficult for him to bend over. “All I was trying to do was hold her until police could get her,” he explains. “I think she was there for a reason.… And that was hurt [sic] Rand Paul.” Though Paul has refused to return money donated to the campaign by Profitt, and touted Profitt’s support in a campaign ad that has continued to run after the assault (see October 26, 2010), the Paul campaign released Profitt from his duties as Bourbon County campaign coordinator, and says: “Whatever the perceived provocation, any level of aggression or violence is deplorable, and will not be tolerated by our campaign. The Paul campaign has disassociated itself from the volunteer who took part in this incident.” Paul appears on a Fox News broadcast this morning saying he dislikes the incident. Paul is popular with local and national “tea party” organizations; his father is US Representative Ron Paul (R-TX), considered by many to be an ideological forefather of the “tea party” movement. (Pierce 10/26/2010; Dorsett 10/26/2010) Profitt is charged with fourth-degree assault. If convicted, he faces a maximum penalty of 12 months in jail, a $500 fine, or a combination of both. The criminal summons alleges that Profitt “intentionally placed his foot on the shoulder/head region on the victim and applied a degree of pressure on the victim.” (Kegley 10/30/2010) Profitt will plead not guilty. His lawyer Michael Dean will tell the court that the assault was justified. “I’m sure he was doing at the time what he thought was necessary,” Dean will say. He later tells reporters: “Admittedly if you look at the video on the Internet and TV and don’t see anymore than what was shown it looks like he may have gone out of line. But if you look at the rest of the video of what she was doing before hand and get the whole story, I think you will see my client is justified.” (Schreiner 11/18/2010; McMorris-Santoro 11/19/2010)