This page can be viewed at http://www.historycommons.org/entity.jsp?entity=tom_fitton_1

Tom Fitton was a participant or observer in the following events:

Judicial Watch logo. [Source: Judicial Watch]The conservative government watchdog organization Judicial Watch sends a letter to Vice President Dick Cheney demanding to see the records of his secret energy task force (see January 29, 2001 and May 16, 2001). Chris Farrell, the organization’s director of investigations and research, saw a May 2001 Newsweek article about the task force. Farrell later says he was struck by the similarities between Cheney’s energy task force and the 1994 health care task force chaired by then-First Lady Hillary Clinton. “The government can’t operate in secret,” Farrell will later say. “They are answerable to the people. There are appropriate times for secrecy on military and intelligence matters, but the notion that national policy on a matter like energy or health care can be developed in secret is offensive and counter to the Constitution.” Farrell, along with Judicial Watch chairman Larry Klayman and president Thomas Fitton, agreed that the task force violates core conservative principles, and made the decision to challenge Cheney’s office. Their letter notes that the rules governing the task force are clear: if the executive branch chooses to solicit outside advice while writing policy, then the Federal Advisory Committee Act (FACA) is triggered, requiring the government to make the details of those meetings public (the same argument made by the General Accounting Office—see May 8, 2001). “Judicial Watch respectfully requests that, in light of the questionable legal and ethical practices, negative publicity, and public outrage surrounding Hillary Rodham Clinton’s 1994 national health-care policy development group, you direct the [energy task force] to abide by the FACA. [Such openness] will instill public trust and confidence in the operations of the [task force] and insure that the national policy is formulated, discussed, and acted upon in a manner consistent with the best traditions of our Constitutional Republic.” (Savage 2007, pp. 91-92) Cheney’s office will refuse the request (see July 5, 2001). In return, Judicial Watch will sue for the documents’ release (see July 14, 2001).

US District Court Judge Gladys Kessler, appointed to the bench by former President Bill Clinton, rules that the Bush administration is within the law in refusing to release documents pertaining to pardons issued by Clinton to Congress (see August 21, 2001 and December 13, 2001). Judicial Watch president Tom Fitton accuses Kessler of endorsing the Bush administration’s claim of executive privilege in order to protect Clinton’s reputation. The White House hails the ruling, and spokesman Scott McClellan notes that the courts have now recognized that the privilege “applies to former, current, and future presidents.” In 2007, author and reporter Charlie Savage will write that the ruling hands “the Bush-Cheney legal team another victory in its bid to expand the White House’s power to keep its inner workings secret.” (Savage 2007, pp. 99) 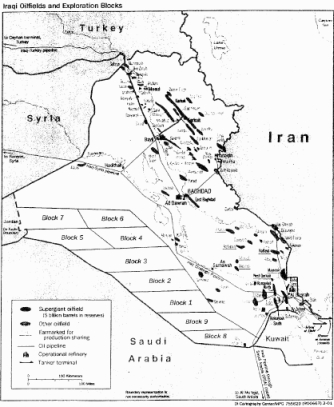 Map of Iraqi oil fields included in released documents. [Source: Judicial Watch]The conservative government watchdog group Judicial Watch releases documents recently turned over by the US Commerce Department through a Freedom of Information Act (FOIA) request. The documents show some of the activities of the secretive energy task force chaired by Vice President Dick Cheney (the National Energy Policy Development Group—see May 16, 2001). Cheney and the White House successfully blocked Congress from learning even the most basic information about the task force’s activities (see February 22, 2002). The Commerce Department documents include maps of Iraqi oil fields and oil infrastructure, and other charts showing Iraqi oil and gas projects, and a document entitled “Foreign Suitors for Iraqi Oilfield Contracts.” Other maps and documents show detailed information about oil fields and infrastructure in Saudi Arabia and the United Arab Emirates. All of the documents are dated March 2001. Judicial Watch has sought these documents under FOIA since April 2001, and only secured them after a federal judge ordered their release in March 2002. (The Judicial Watch lawsuit was consolidated with a similar suit from the Natural Resources Defense Council.) Why the government waited over a year to release the documents, even after a court order compelling them to do so, is unclear. “These documents show the importance of the Energy Task Force and why its operations should be open to the public,” says Judicial Watch’s Tom Fitton. “This was not about national security. This was about an undersecretary talking to a lobbyist.” (Judicial Watch 7/17/2003; Judicial Watch 7/17/2003; Dubose and Bernstein 2006, pp. 14-15) Authors Lou Dubose and Jake Bernstein call the Iraqi oil field documents “stunning,” and ask: “Why were the vice president and a group of oilmen poring over maps of Iraq long before there was any pretext to invade the country? Iraq’s oil was technically embargoed and under UN control—why make plans for divvying up oil reserves?” Dubose and Bernstein believe that Cheney may have been planning for US control of Iraq long before the Bush administration’s public push for war with that nation. Fitton is not so sure, but says worriedly: “We don’t know because we weren’t given the context. We have no way of knowing what they were deliberating.” (Dubose and Bernstein 2006, pp. 14-15) Judicial Watch, with other public interest groups such as the Sierra Club, will continue to seek information about the Cheney task force (see December 15, 2003 and April 27, 2004).

May 16, 2006: Pentagon Releases Two Videos of the Pentagon Crash, but the Quality Is Poor

A frame from the video showing the attack on the Pentagon. [Source: US Department of Defense]For the first time, the US Department of Defense officially releases video footage of the Pentagon attack. Two security cameras outside the building recorded the footage on the morning of 9/11 (see 9:37 a.m. September 11, 2001). (US Department of Defense 9/11/2001; US Department of Defense 9/11/2001; Burns 5/17/2006; Markon 5/17/2006) The digital cameras positioned north of the crash site had recently been installed and were still undergoing testing. They were part of a security system that enabled a guard in a booth to identify drivers heading toward the parking lot for the Pentagon Mall Entrance. (Goldberg et al. 2007, pp. 161) The Pentagon releases the two videos in response to a Freedom of Information Act request and related lawsuit by the public interest group Judicial Watch. It previously refused to do so because, it said, the tapes were “part of an ongoing investigation involving Zacarias Moussaoui.” (Judicial Watch 5/16/2006) Both tapes were played as evidence during Moussaoui’s recent death penalty trial. (Markon 5/17/2006) However, the footage is of poor quality and several still images from one of the tapes have in fact already been released unofficially (see March 7, 2002). (Burns 5/17/2006) Furthermore, Judicial Watch had sought all recordings of the Pentagon attack, including those taken by cameras at the nearby Sheraton Hotel and Citgo gas station, and Virginia Department of Transportation traffic cameras (see (After 9:37 a.m.) September 11, 2001). (Judicial Watch 5/16/2006) According to CNN’s Jamie McIntyre: “[T]here are at least 80 other tapes that the government is holding onto. We’re told that they don’t really show much, but sources have told us that at least one of the tapes from a security camera at a nearby hotel may have captured the plane in the air.” (CNN 5/20/2006) So far, none of these tapes have been made public, though the FBI will release the footage from the Citgo gas station and video taken from the Doubletree Hotel in Arlington later this year (see September 13, 2006-Early December 2006). Judicial Watch President Tom Fitton says he hopes the newly released Pentagon security camera footage “will put to rest the conspiracy theories involving American Airlines Flight 77.” For example, some suggest a missile hit the Pentagon on 9/11. (BBC 5/16/2006) However, it appears to have the opposite effect, causing Internet traffic to 9/11 conspiracy websites to soar. James Fetzer, co-chair of the group Scholars for 9/11 Truth, says of the videos: “There is no new information here whatsoever… You can’t tell what in the world is hitting the Pentagon.” (Alberts 5/18/2006)