This page can be viewed at http://www.historycommons.org/entity.jsp?entity=tommy_g._thompson

Tommy G. Thompson was a participant or observer in the following events:

US Health and Human Services (HHS) Secretary Tommy G. Thompson announces his agency’s emergency response: “CDC has a team on the ground taking air, dust and water samples. This is of utmost concern to health officials. Also, Disaster Mortuary Operational Response Teams will ensure that the process of removing bodies is conducted as safely as possible, and identifications occur as efficiently as possible. The heavy dust that has coated Lower Manhattan following the attack also poses respiratory risks, particularly to our children and elderly citizens. We are well aware that New York has one of the highest childhood asthma rates in the nation, and CDC officials are working with New York authorities to conduct tests and protect our vulnerable residents from high levels of dust in the air.” (US Health and Human Services 9/12/2001)

On October 2, 2001, Robert Stevens, a photo editor at the tabloid The Sun, arrived at a Florida hospital with a 102-degree fever and vomiting. He quickly got worse. The next day, doctors determine he has been infected with anthrax. He is put on a respirator. On October 4, Florida doctors and officials hold a press conference to confirm that a patient has anthrax, but that they believe it is an isolated case. On October 5, Stevens is pronounced dead, becoming the first person in the US to die from anthrax since 1976. One of Stevens’s coworkers, Ernesto Blanco, has been hospitalized with pneumonia since October 1, but it will not be discovered that Blanco also has anthrax until shortly after Stevens’s death. (South Florida Sun-Sentinel 12/8/2001) Health and Human Services Director Tommy Thompson tells reporters that the Stevens infection is “an isolated case” that is “not contagious.” Thompson reassures the public, “There is no terrorism” involved in Stevens’s infection. He also asserts that Stevens was infected from an environmental source, saying, “We do know that he drank water out of a stream when he was traveling to North Carolina last week.” It is unclear whether Thompson is misinformed or being deliberately deceptive. (Harnden and Fenton 10/5/2001; Rich 2006, pp. 34)

Despite the fact that two US senators, Tom Daschle (D-SD) and Patrick Leahy (D-VT), had letters laced with anthrax mailed to their offices (see October 6-9, 2001), the Bush administration’s response is, as later characterized by author Frank Rich, lackadaisical. “Bush said little about it,” Rich will write in 2006, instead “delegating the problem to ineffectual Cabinet members like [Health and Human Services Secretary Tommy] Thompson and the attorney general, John Ashcroft. The rank incompetence of these two Cabinet secretaries, at most thinly disguised by a veneer of supercilious officiousness, was farcical. They were Keystone Kops, in the costumes of bureaucrats, ready at any time to slip on a banana peel.” (Rich 2006, pp. 34-35)

A federal advisory committee at the Centers for Disease Control and Prevention (CDC) is preparing to vote on whether to lower the amount of lead exposure considered dangerous to children. The level was last set in 1991, and since then new research has proven that even smaller amounts of lead than previously thought are harmful to children’s cognitive development. The panel is preparing to adjust the level downward, a move that could cost paint and gasoline companies in potential lawsuits. But Tommy Thompson, the secretary of health and human services, intervenes. He abruptly replaces five experts with five new panel members known to be supporters of corporate interests that would be affected by the new regulation—one had testified on behalf of a paint company to his belief that children could withstand exposure to lead far in excess of federal regulations (and established science), and others handpicked by the lead industry. Two have financial ties to the industry. Unsurprisingly, the new panel votes to leave the recommended lead level exposure at its given levels. Until Thompson’s move, panel members had not been chosen for ideological or political reasons, but by career staff. (Savage 2007, pp. 302) 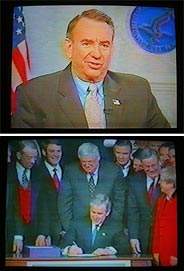 Clips of Thompson, Bush included in VNRs provided to local TV stations. [Source: New York Times]New York Times reporter Robert Pear discovers that the Bush administration has employed two fake “reporters,” Karen Ryan and Alberto Garcia, who have appeared in administration-produced television “news” segments—“video news releases,” or VNRs—designed to promote the administration’s new Medicare prescription-drug policies. (Garcia primarily appeared in Spanish-language Medicare VNRs.) HHS had budgeted $124 million for the fake news segments, more than most real news organizations can provide. The segments are under investigation by the General Accounting Office (GAO) for possible violation of government statutes prohibiting the use of federal money to produce propaganda or partisan presentations. The Secretary for Health and Human Services (HHS), Tommy Thompson, appears in one of the segments, saying, “This is going to be the same Medicare system only with new benefits, more choices, more opportunities for enhanced benefits.” Several others show a crowd giving President Bush a standing ovation as he signs the new Medicare bill into law. Another segment shows a pharmacist talking to an elderly customer. The pharmacist says the new law “helps you better afford your medications,” and the customer says, “It sounds like a good idea.” The pharmacist agrees, “A very good idea.” The segments, professionally produced and ending with tag lines such as “In Washington, I’m Karen Ryan reporting,” were regularly aired by at least 50 local television news broadcasts in 40 cities around the country. The government also provides scripts that can be used by local news anchors to introduce, or “walk up,” the VNRs. One script suggested that anchors read the following: “In December, President Bush signed into law the first-ever prescription drug benefit for people with Medicare. Since then, there have been a lot of questions about how the law will help older Americans and people with disabilities. Reporter Karen Ryan helps sort through the details.” A VNR is then broadcast explaining how the new law benefits Medicare recipients.
'Infoganda' - Ryan is a freelance journalist, the administration claims, and using her for such fake news segments is perfectly acceptable. But cursory investigation reveals that she was once a freelance reporter, but has for years worked as a public relations consultant. Her most recent assignments include appearing in marketing videos and “infomercials” promoting a variety of pharmaceutical products, including the popular drugs FloMist and Excedrin. Perhaps the most telling reaction is from Comedy Central’s comedy-news program The Daily Show, where host Jon Stewart can’t seem to decide whether to be outraged or flattered by what Rich calls “government propaganda imitating his satiric art.” (Daily Show member Rob Corddry calls the HHS videos “infoganda.”) Administration officials also insist that the VNRs are real, objective news releases, but the company that produced the segments, Home Front Communications, confirms that it had hired Ryan to read a script prepared by government officials. The VNRs give a toll-free phone number for beneficiaries to call. To obtain recorded information about prescription drug benefits, the caller must speak the words, “Medicare improvement.” The Columbia Journalism Review writes, “The ‘reports’ were nothing more than a free advertisement for the legislation, posing as news.”
Legal? - GAO lawyers say that their initial investigations found that other fliers and advertisements disseminated by HHS to promote the new Medicare policies are legal, though they display “notable omissions and other weaknesses.” Administration officials claim the VNRs are also a legal, effective way to educate Medicare beneficiaries. The GAO is still investigating the VNRs. GAO investigators believe that they might violate the law in at least one aspect: misleading viewers by concealing their government origins. Federal law expressly forbids the use of federal money for “publicity or propaganda purposes” not authorized by Congress. Earlier investigations have found government-disseminated editorials and newspaper articles illegal if they did not identify themselves as coming from government officials. The GAO will find that the VNRs break two federal laws forbidding the use of federal money to produce propaganda (see May 19, 2004).
'Common Practice' - HHS spokesman Kevin Keane says the VNRs are well within legal guidelines; their only purpose, he says, is to inform citizens about changes in Medicare. “The use of video news releases is a common, routine practice in government and the private sector,” he says. “Anyone who has questions about this practice needs to do some research on modern public information tools.” Congressional Democrats disagree with Keane. “These materials are even more disturbing than the Medicare flier and advertisements,” says Senator Frank Lautenberg (D-NJ). “The distribution of these videos is a covert attempt to manipulate the press.” Lautenberg, fellow Senator Edward Kennedy (D-MA), and seven other members of Congress requested the GAO investigation. Keane is correct in one aspect: businesses have distributed VNRs to news stations as well as internally for years, and the pharmaceutical industry has been particularly successful in getting marketing videos that appear as “medical news” or “medical features” aired on local and even national news broadcasts. And government agencies have for years released informational films and videos on subjects such as teenage smoking and the dangers of using steroids. Bill Kovach, chairman of the Committee of Concerned Journalists, says HHS’s VNRs have gone far beyond what the government has previously provided. “Those to me are just the next thing to fraud,” he says. “It’s running a paid advertisement in the heart of a news program.” (Pear 3/15/2004; McDermott 3/15/2004; Rich 2006, pp. 164)
Media Responsibility - The Columbia Journalism Review’s Bill McDermott writes: “[F]or our money, the villains here aren’t the clever flacks at HHS—they’re supposed to be masters of deception. Nope, the dunce hats go to the local TV station editors willing to slap onto the air any video that drops in over the transom.” (McDermott 3/15/2004) Ryan is relatively insouciant about the controversy. “Stations are lazy,” she says. “If these things didn’t work, then the companies would stop putting them out.” (Pittsburgh Post-Gazette 3/20/2004)