This page can be viewed at http://www.historycommons.org/entity.jsp?entity=tony_amos

Tony Amos was a participant or observer in the following events: 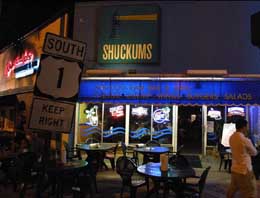 Shuckums bar and grill, in Hollywood, Florida. [Source: Patrick Durand/ Corbis]Two future 9/11 hijackers drink alcohol with an unidentified man. Mohamed Atta spends time drinking with Marwan Alshehhi and a third man at Shuckums, a sports bar in Hollywood, Florida. Bartender Patricia Idrissi will later remember that the third man plays a video machine at one end of the restaurant while Atta and Alshehhi sit drinking and arguing. Alshehhi drinks rum and coke; Atta consumes five Stolichnaya vodkas with orange juice. When it comes to pay Atta complains about their $48 bill and argues with the manager. “You think I can’t pay my bill?” Atta shouts. “I am a pilot for American Airlines. I can pay my f_cking bill.” Then he reportedly peels out a note from a thick wad of $50 and $100 bills, leaving a $2 tip. (Thomas 9/12/2001; Vulliamy et al. 9/16/2001) Atta, Alshehhi, and the third unidentified man came into Shuckums already drunk, according to Idrissi, who will tell the St. Petersburg Times, “They were wasted.” Idrissi directs the men to a nearby Chinese restaurant. Later they return and drink some more, each ordering about five drinks. (Thomas 9/12/2001; Klein et al. 9/13/2001) According to manager Tony Amos, “The guy Mohamed was drunk, his voice was slurred, and he had a thick accent.” (Thomas 9/12/2001) According to the London Observer, the men are drinking at Shuckums during the afternoon. (Vulliamy et al. 9/16/2001) However, Amos will tell the Associated Press that they visit his bar on “Friday night.” (Thomas 9/12/2001) The account of the story will slowly change over time, and later articles will say Atta plays video games and drinks cranberry juice instead of vodka, and that Alshehhi is the one who argues over the bill and pays (see September 12, 2001 and After). (Achenbach 9/16/2001) In 2011, the Miami Herald will note that the third man with Atta and Alshehhi is never identified. (Brecher 5/5/2011) According to some witnesses, Atta and Alshehhi spend the evening of September 7 in Longboat Key, Florida. (see September 7, 2001). (Sullivan 11/21/2001)

September 12, 2001 and After: Account of 9/11 Hijackers Drinking Alcohol Changes over Time without Explanation

One of the first and most frequently told stories about the 9/11 hijackers is the visit of two hijackers to Shuckums, a sports bar in Hollywood, Florida, on September 7, 2001 (see September 7, 2001). What is particularly interesting about this story is how it changes over time. In the original story, first reported on September 12, 2001 (Thomas 9/12/2001) , hijackers Mohamed Atta and Marwan Alshehhi, and an unidentified man, came into the restaurant already drunk. “They were wasted,” says bartender Patricia Idrissi, who directed them to a nearby Chinese restaurant. (Klein et al. 9/13/2001) Later they returned and drank—Atta ordered five vodka and orange juices, while Alshehhi ordered five rum and Cokes. (Mcgeary and van Biema 9/24/2001) According to manager Tony Amos, “The guy Mohamed was drunk, his voice was slurred, and he had a thick accent.” Idrissi says they argued about the bill, and when she asked if there was a problem, “Mohamed said he worked for American Airlines and he could pay his bill.” (Thomas 9/12/2001) This story is widely reported through much of September. (Canedy and Sanger 9/13/2001; Doup and Lipka 9/15/2001; Mackay 9/16/2001; Morgan, Kidwell, and Corral 9/22/2001; Thomas and Hosenball 9/24/2001; Mcgeary and van Biema 9/24/2001) However, beginning on September 15, a second story appears. (van Rijn 9/15/2001) This story is similar to the first, except that here, Atta was playing video games and drinking cranberry juice instead of vodka, and Alshehhi was the one who argued over the bill and paid. After some coexistence, the second story becomes predominant in late September 2001. This new version makes no reference to the fact that alcohol had been mentioned in previous accounts of the incident. (Achenbach 9/16/2001; Finn 9/22/2001; Williams, Dahlburg, and Reza 9/27/2001; Freedberg 9/27/2001; Australian Broadcasting Corporation 11/12/2001; Sunday Times (London) 2/3/2002)