This page can be viewed at http://www.historycommons.org/entity.jsp?entity=tony_gentry

Tony Gentry was a participant or observer in the following events: 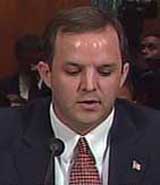 Erik Kleinsmith. [Source: C-SPAN]Maj. Eric Kleinsmith, chief of intelligence for the Land Information Warfare Activity (LIWA) unit, is ordered to destroy data and documents related to a military intelligence program set up to gather information about al-Qaeda. The program, called Able Danger, has identified Mohamed Atta and three other future hijackers as potential threats (see January-February 2000). According to Kleinsmith, by April 2000 it has collected “an immense amount of data for analysis that allowed us to map al-Qaeda as a worldwide threat with a surprisingly significant presence within the United States.”(see January-February 2000) (Fox News 9/21/2005; New York Times 9/22/2005) The data is being collected on behalf of Maj. Gen. Geoffrey Lambert, the J3 at US Special Operations Command, who is said to be extremely upset when he learns that the data had been destroyed without his knowledge or consent. (US Congress. Senate. Committee on Judiciary 9/21/2005) Around this time, a separate LIWA effort showing links between prominent US citizens and the Chinese military has been causing controversy, and apparently this data faces destruction as well (see April 2000). The data and documents have to be destroyed in accordance with Army regulations prohibiting the retention of data about US persons for longer than 90 days, unless it falls under one of several restrictive categories. However, during a Senate Judiciary Committee public hearing in September 2005, a Defense Department representative admits that Mohamed Atta was not considered a US person. The representative also acknowledges that regulations would have probably allowed the Able Danger information to be shared with law enforcement agencies before its destruction. Asked why this was not done, he responds, “I can’t tell you.” (Broache 9/21/2005) The order to destroy the data and documents is given to Kleinsmith by Army Intelligence and Security Command General Counsel Tony Gentry, who jokingly tells him, “Remember to delete the data—or you’ll go to jail.” (Stirland 9/21/2005) The quantity of information destroyed is later described as “2.5 terabytes,” about as much as one-fourth of all the printed materials in the Library of Congress. (De 9/16/2005) Other records associated with the unit are allegedly destroyed in March 2001 and spring 2004 (see Spring 2004). (Associated Press 9/21/2005; US Congress 9/21/2005; Fox News 9/24/2005)