This page can be viewed at http://www.historycommons.org/entity.jsp?entity=tony_hopfinger_1

Tony Hopfinger was a participant or observer in the following events: 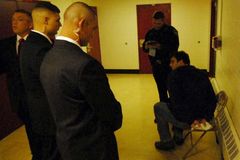 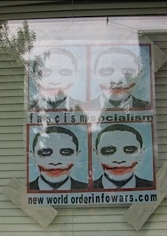 The poster featured in the front window of the Drop Zone. The caption reads: “Fascism. Socialism. New World Order. InfoWars.com.” [Source: Life in Spenard (.com)]Investigative reporters and bloggers learn that the private security firm hired by Alaska Senate candidate Joe Miller (R-AK) is also active in right-wing militia and paramilitary activities. They also learn that some of the guards employed by the firm, the Drop Zone (DZ), are active-duty military soldiers, and that the firm is unlicensed and therefore operating outside the law. (Moore 10/18/2010; Mauer 10/18/2010; Greenwald 10/19/2010)
Senate Candidate Has History of Armed Intimidation, Association with Militias - Miller himself has a history of armed intimidation: according to blogger and reporter Shannyn Moore, in 2008 he attempted to stage a “coup d’etat” of the leadership of the Alaska Republican Party, appearing during a meeting with a group of armed security guards. (The attempt, as such, was unsuccessful, and Miller currently enjoys the support of the Alaska Republican Party.) During the 2010 Senate campaign, Miller’s supporters drew media attention by brandishing assault rifles during campaign rallies (see July 19, 2010). (Moore 10/18/2010)
Security Guards on Active Duty with Army - On September 17, Miller’s security guards forcibly detained and handcuffed reporter Tony Hopfinger for attempting to question Miller about disciplinary measures taken against him while he was a lawyer for the Fairbanks North Star Borough (see October 17, 2010). The security guards work with DZ, and two of the guards who roughed up Hopfinger are on active duty with the US Army. The two guards, Specialist Tyler Ellingboe and Sergeant Alexander Valdez, are members of the 3rd Maneuver Enhancement Brigade at Fort Richardson. Army public affairs officer Major Bill Coppernoll says neither soldier has permission from their commanding officers to work for DZ, and the Army is still looking into whether previous company or brigade commanders authorized their employment. “They’ve got to be up front with the chain of command,” Coppernoll says. “The chain of command needs to agree they can do that without affecting the readiness and the whole slew of things that are part of being a soldier that they need to do first.” DZ owner William Fulton, who was one of the guards who restrained and handcuffed Hopfinger, says it is not his job to ensure that the soldiers complied with Army regulations. “They’re adults—they are responsible for themselves,” Fulton says. (Mauer 10/18/2010; Greenwald 10/19/2010) Hopfinger identifies Ellingboe and Valdez as two of the guards who stood over him during the time he was handcuffed. Hopfinger says Ellingboe and Valdez refused to give him their names and would not identify their company or who they were working for. At one point they told him they were volunteers, he says. (Epler 10/19/2010) A Defense Department directive from 2008, entitled “Political Activities by Members of the Armed Forces on Active Duty,” states in part, “A member of the armed forces on active duty shall not:… [p]erform clerical or other duties for a partisan political committee or candidate during a campaign.” (Department of Defense 2/19/2008

)
Security Firm: Ties to Militias, Blackwater - Fulton is an active member of the Alaska Citizens Militia, where he is titled a “supply sergeant.” The organization is led by former Michigan Militia leader Norm Olson (see April 1994, March 25 - April 1, 1996, and Summer 1996 - June 1997), who recently attempted to run for lieutenant governor of Alaska under the auspices of the secessionist Alaskan Independence Party (AIP—see September 6-7, 2008). (Hartman 10/20/2010; PalinGates 10/20/2010) Many DZ employees have bragged about their connections to far-right elements in Alaska’s political and paramilitary scenes, and have said that the firm employs a number of former Blackwater security personnel. The firm displays a large poster of President Obama as “The Joker” in its front window and a link to InfoWars.com, a right-wing conspiracy Web site hosted by Alex Jones. The owner of the Drop Zone, William Fulton, has boasted to patrons about his partners’ participation in renditions and “black ops” overseas, and likes to show his .50-caliber sniper rifle to prospective customers. Fulton has frequently told patrons about his fondness for Fox News talk show host Glenn Beck, saying to one, “Glenn talks to the crazies,” who are his best customers. Fulton also has suspected ties to the Alaskan Independence Party, which once claimed Todd Palin, former Governor Sarah Palin’s husband, as a member. (Moore 10/18/2010; Mauer 10/18/2010; Life in Spenard 10/18/2010; Greenwald 10/19/2010)
Miller's Ties to Militias - Alaska Citizens Militia leader Ray Southwell, a longtime crony of Olson’s and a fellow leader of the Alaska Citizens Militia, recently wrote of meeting Miller at a militia leader’s home in Soldotna, Alaska. Southwell wrote in a militia forum that he recently encouraged Miller to run for state office: “We need leaders here to stand against the feds.” In that same forum, Olson posted his endorsement of Miller’s candidacy. (PalinGates 10/20/2010)
Expired License - Investigating bloggers also find that the Drop Zone’s license to do business as a security firm (under the name “Dropzone Security Services”) expired in December 2009. The firm updated its license on September 18, 2010, the day after its guards detained and handcuffed Hopfinger, but only renewed its license to trade, not its license to provide security. (The Immoral Minority 10/19/2010; Hartman 10/20/2010; PalinGates 10/20/2010) Fulton tells a reporter that he is not a security guard and that DZ is not a security guard agency, therefore he needs no license to operate as a security firm. Instead, he says, DZ is a “contract agency” and that he and his people are considered “security agents,” not guards. “We don’t do anything covered under the security [statutes],” he says. “We don’t do anything that the state has any authority to tell us what to do.” He denies having any employees, and says he hires specific people on a contract basis. DZ is primarily a military supply store, Fulton says, and only does security contracts “three or four times a month.” He admits to doing business with Miller in the past, but refuses to go into detail. He goes on to say that his guards at the Miller event were unarmed, and his “contractors” only carry weapons when they undertake “fugitive recovery” jobs: “All the guys we use are professionals, and they act professionally and dress professionally.” Hopfinger disagrees with Fulton’s contention that he is a security “agent” as opposed to a “guard,” saying: “He certainly acted like an aggressive security guard and he may have broken the law. It was an illegal detention and an illegal arrest.” Of Miller, Hopfinger says the candidate is exhibiting “poor judgment… to have Fulton and active-duty soldiers be his bodyguards.” No other Alaska political candidate he has interviewed, including Miller’s Republican opponent Lisa Murkowski (R-AK), has security guards with them, he says. (Epler 10/19/2010)
Investigation - The firm is being investigated by the Alaska Department of Public Safety, both for its handling of the Hopfinger incident and for its unlicensed status. (Epler 10/19/2010)