This page can be viewed at http://www.historycommons.org/entity.jsp?entity=united_nations_commission_on_the_status_of_women_1

Profile: United Nations Commission on the Status of Women

United Nations Commission on the Status of Women was a participant or observer in the following events: 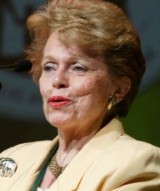 Ellen Sauerbrey. [Source: Salon]The New York Times criticizes President Bush for nominating a political crony with no expertise to a critical State Department position. Bush has nominated Ellen Sauerbrey, a Maryland Republican legislator who chaired his 2000 presidential campaign in that state, to the post of assistant secretary of state for population, refugees, and migration, a nomination the Times calls “patronage.” The Times describes the post as “coordinat[ing] the delivery of life-sustaining emergency aid to refugees of foreign wars, persecution, and natural disasters.” Sauerbrey would oversee a bureau responsible for allocating $700 million a year to private relief groups and United Nations agencies, mostly to set up refugee camps and arrange for food deliveries, protection, and other vital aid in third world countries. “Ms. Sauerbrey has no experience responding to major crises calling for international relief,” the Times notes. “This is a post for an established expert in the field.” Sauerbrey was chosen for another “patronage job” in 2002, the Times continues, as the US representative to the United Nations Commission on the Status of Women. “There she has relentlessly pressed an anti-abortion and anti-family-planning agenda at international conferences meant to focus on urgent problems like sexual trafficking and the spread of AIDS,” the Times writes. Salon will later note that during her tenure at the UN, Sauerbrey worked to scuttle international agreements that guaranteed women’s rights to reproductive health care. The Times recommends that the Senate Foreign Relations Committee block her nomination; editorial boards for a number of other newspapers also oppose her nomination. (Goldberg 1/6/2005; New York Times 10/11/2005) Sauerbrey will be granted the position as a recess appointment (see January 5, 2006).