This page can be viewed at http://www.historycommons.org/entity.jsp?entity=us_department_of_the_interior_1

Profile: US Department of the Interior

US Department of the Interior was a participant or observer in the following events:

Incoming Vice President Dick Cheney is already working to formulate the new administration’s energy policy, and to do so he is calling on a variety of CEOs and lobbyists for the oil, gas, and energy corporations. Authors Lou Dubose and Jake Bernstein will later observe that Cheney’s “visitor log began to look like the American Petroleum Institute [API]‘s membership list. This was no coincidence.” In early January, an oil and gas lobbyist brings a group of industry executives to the API’s Washington offices to put together a wish list for Cheney and the administration. Shortly after the inauguration, the same lobbyist, J. Steven Griles, will be named deputy secretary of the interior and assigned to work with the Cheney energy task force (see May 16, 2001). Griles will become the conduit for API members to funnel their recommendations directly to the task force. (Dubose and Bernstein 2006, pp. 7) 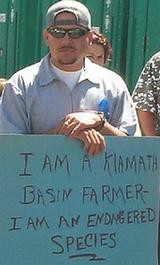 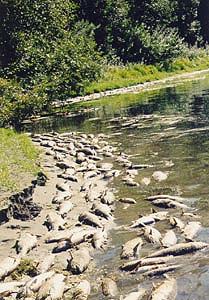 Some of the tens of thousands of salmon killed due to the artificial water lowering by the Department of the Interior. [Source: Environmental News Service]The House Natural Resources Committee, led by Nick Rahall (D-WV) and Mike Thompson (D-CA), decides to investigate the role of Vice President Dick Cheney in a 2002 salmon kill (see April 2002) on Northern California’s Klamath River, the largest fish kill in modern Western history (see September 2002). “We know where the smoking gun lays,” says Chris Lawson, a fisherman and president of the Bodega Bay Fisherman’s Marketing Association. No one in Northern California or Oregon (another state affected by the fish kill) knew of Cheney’s role until a recent story in the Washington Post uncovered Cheney’s successful attempt to subvert both scientific evidence and the Endangered Species Act to allow a water release that drastically lowered the water level in the Klamath. The day the article appears, Thompson and 35 other Democrats call for a hearing by the House Natural Resources Committee, saying in a letter that “[t]he ramifications of that salmon kill are still being felt today as returns to the Klamath River are so low that commercial, sport and tribal fishing seasons have been curtailed for the past three years.” A day later, Rahall agrees. The hearing will be held a month later (see August 1, 2007). In October 2002, Thompson piled 500 pounds of dead coho salmon in front of the Interior Department, accusing that agency of “gross mismanagement” in the wildlife disaster. Now Thompson asks, “We know that science was manipulated and the law was violated. Did in fact the vice president of the United States put pressure on mid-level bureaucrats to alter the science and circumvent the law in order to gain political votes for his re-election or the election of other people in Oregon?” Cheney’s office responds to the hearings by saying it is “disappointing the Democrats would rather investigate than legislate,” and that the Post story is nothing more than “a repackaging of old accusations.” Cheney’s office refuses to say whether Cheney will agree to testify before the committee. The reduced river flow in 2002, says Thompson, “wasn’t about salmon or water, it was about electoral votes in Oregon.” Since the fish kill, the courts have prohibited the diversion of Klamath water for agricultural use once the water levels drop below a critical point. But in the years after the fish kill, the salmon catch has been gravely reduced. Commercial fishing in California and Oregon has suffered a more than 90% drop as recently as 2006; Congressional Democrats say the result has been over $60 million in damage to coastal economies. Only in 2007 have the number of young salmon in the Klamath shown indications that salmon numbers may once again be increasing. (Daly 6/28/2007; Kavner 7/9/2007) However, the Klamath salmon are still gravely threatened by rampant fish diseases infesting tens of thousands of juvenile salmon, as well as abnormally high water temperatures and low water levels. (Bacher 7/16/2007)

Representative Nick Rahall. [Source: Nick Rahall]The House Natural Resources Committee holds a hearing to investigate the role that Vice President Dick Cheney and other Bush administration officials played in the decision that led to the largest fish kill in modern Western United States history (see Mid-2001 - Early 2002 and June 27-28, 2007). The committee is unable to find conclusive proof that Cheney directly gave the orders that led to the fish kill. A former Interior Department official, Deputy Inspector General Mary Kendall, testifies that Cheney pressured the department to release water in the Klamath River in Northern California, even though the water release would threaten the life cycle of tens of thousands of salmon who live and breed in the river. The water release was to benefit drought-stricken farmers and ranchers in the area. The decision went against the provisions of the Endangered Species Act as well as an overwhelming majority of scientific opinion and the tribal water rights of local Native Americans. Former fisheries biologist Michael Kelly, who worked on the Klamath issue, testifies that he cannot be sure whether Cheney interfered in the situation. “I was aware that President Bush had declared he’d do everything he could to get water to the farms,” Kelly says, and adds that he knew his own superiors were being pressured to speed up assessments and tilt the science to favor the farmers. “I was essentially asked to support a conclusion that made as much sense as 1+1=3,” Kelly says. The biological opinion underlying the plan was “completely bogus and illegal,” he adds. Chairman Nick Rahall (D-WV) calls the Klamath fish kill “a fiasco” and lambasts Cheney and Interior Secretary Dirk Kempthorne for refusing to testify before the committee. “I will not pretend to be surprised [Cheney] declined our invitation,” Rahall says. “But I am obliged to express disappointment at the difficulty we have had in trying to learn the truth and conduct basic oversight over an agency and an administration that have made secrecy and lack of accountability hallmarks of their tenure.” Rahall notes that “[w]hen it comes to political interference and ethical lapses at the department, the Klamath River is just the tip of the iceberg.… I find it difficult to see how we can trust any decision made in an agency that has, time and again, betrayed its own career scientists, repeatedly failed to hold its appointees to ethical standards and so callously disregarded its mission for the sake of political gain.” (Environmental News Service 8/1/2007)

President Obama names Earl Devaney to head the new Recovery Act Transparency and Accountability Board, a new agency designed to oversee the allocation and spending of the $787 billion economic stimulus plan. Devaney is a former Secret Service agent who, as the inspector general of the Department of the Interior, helped expose lobbyist corruption there; he will work closely with Vice President Joseph Biden, who will coordinate oversight of the stimulus spending. Devaney helped expose Republican lobbyist Jack Abramoff’s dealings with the Interior Department, and helped finger former Deputy Interior Secretary Steven Griles, who later pled guilty to charges of lying to Congress over his acceptance of bribes. Devaney also led an investigation of workers at the Interior Department’s Minerals Management Service, where he discovered what he called a “culture of substance abuse and promiscuity” at the Denver and Washington offices of the service. (Associated Press 2/22/2009)