This page can be viewed at http://www.historycommons.org/entity.jsp?entity=us_european_command_1

US European Command (EUCOM) was a participant or observer in the following events: 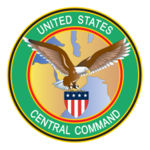 (After 9:03 a.m.) September 11, 2001: Military Personnel Are Preparing for an Exercise in Europe Based on Terrorists Threatening to Attack the US

Logo of the United States European Command. [Source: United States European Command]Hundreds of US military personnel are preparing for a major exercise in Europe, which is based around the scenario of terrorists threatening to attack the United States with a nuclear, chemical, or biological weapon, but the exercise is canceled in response to the real-world attacks in the US. The exercise, which is run by the US military’s European Command, is called Ellipse Charlie, according to journalists Eric Schmitt and Thom Shanker. (Schmitt and Shanker 2011, pp. 22-23; Naylor 2015, pp. ix) Ellipse Charlie, however, is run by the Pacific Command. The exercise is therefore likely to be Ellipse Bravo, a European Command exercise. (Arkin 2005, pp. 359; GlobalSecurity (.org) 4/27/2005; GlobalSecurity (.org) 4/27/2005)
Participants Have to Stop Terrorists Who Have an 'Unconventional' Weapon - The exercise is set to take place in six European and Mediterranean countries, and on a ship at sea, and is meant to last 16 days. The goal is for participants “to find and thwart terrorists who [have] captured an unconventional weapon”—i.e. a nuclear, chemical, or biological weapon—“and threatened to use it against the United States,” according to Schmitt and Shanker. About 1,800 Special Operations personnel, along with “a handful of other secret government operators,” are set to take part. (Schmitt and Shanker 2011, pp. 22-23) A smaller exercise called Jackal Cave, which is run by the Joint Special Operations Command and is currently taking place in several European countries, is “nested” in Ellipse Bravo, according to journalist and author Sean Naylor (see (8:46 a.m.-9:03 a.m.) September 11, 2001). (Naylor 2015, pp. ix-x)
Al-Qaeda Is the Mock Enemy in the Exercise - The hypothetical enemy in Ellipse Bravo appears to be al-Qaeda or a similar terrorist group. Although Naylor will claim that the mock terrorists in Jackal Cave are “not Islamist,” according to Schmitt and Shanker, Ellipse Bravo is going to involve “a complicated mock attack from a foe like al-Qaeda.” (Schmitt and Shanker 2011, pp. 23; Naylor 2015, pp. 441) Furthermore, al-Qaeda was apparently the hypothetical enemy in a previous Ellipse Bravo exercise, held in late August to early September 1998. The scenario for that exercise, according to a report by the US Department of Energy, was that “[d]ue to the United States’ continued presence in the Arab world, international terrorist financier Osama bin Laden had called upon the Muslim community to strike back at the United States.” (US Department of Energy 12/3/1998

)
'Ellipse' Exercises Involve Weapons of Mass Destruction - Further details of the current Ellipse Bravo exercise are unclear. “Ellipse” exercises, which are led by the Joint Chiefs of Staff, are “highly classified, interagency, major crisis action and management” exercises that involve weapons of mass destruction, according to military analyst William Arkin. (Arkin 2005, pp. 358) The Ellipse Bravo exercise held in 1998 was intended to “evaluate and validate the US federal response to a radiological weapon of mass destruction in an international environment.” That exercise, which took place outside the US, involved representatives of the US Special Forces and the US Army’s 52nd Ordnance Group, along with personnel from the Department of Energy, including members of its Nuclear Emergency Search Team. (US Department of Energy 2/1999, pp. 121

; Richelson 2009, pp. 172) The current Ellipse Bravo exercise is called off during its final planning stages in response to the terrorist attacks in the US and the commandos involved in it then hurry back to their normal bases. (Schmitt and Shanker 2011, pp. 23)