This page can be viewed at http://www.historycommons.org/entity.jsp?entity=wayne_allyn_root_1

Wayne Allyn Root was a participant or observer in the following events:

Wayne Allyn Root. [Source: NNDB (.com)]Wayne Allyn Root, a millionaire businessman, Las Vegas sports bettor, and right-wing talk show host who is running for president on the Libertarian ticket alongside former Republican congressman Robert “Bob” Barr, lambasts Democratic presidential nominee Barack Obama (D-IL) as a “Marxist” and “communist” whose “mother was a card-carrying communist… he says she’s the most important person in his entire life; he learned everything from her.” Root is most interested in casting doubt that Obama ever attended Columbia University from 1981 to 1983; Obama graduated with an undergraduate degree from that university at the same time Root attended it. Root promises a million dollars that if Obama did attend Columbia, he had a lower grade point average than Root had, and claims that the only reason Obama was allowed to attend Harvard Law School was because of the color of his skin. Obama graduated magna cum laude from Harvard Law School in 1991. “I think the most dangerous thing you should know about Barack Obama is that I don’t know a single person at Columbia that knows him, and they all know me,” Root claims. “I don’t have a classmate who ever knew Barack Obama at Columbia. Ever!… No one ever heard of him.” Root then speculates that Obama “maybe… was involved in some sort of black radical politics.… Maybe he was too busy smoking pot in his dorm room to ever show up for class. I don’t know what he was doing!” Root notes that he graduated with a political science degree, the same degree Obama has, in 1983, and “[n]ever met him in my life, don’t know anyone who ever met him.” Root says he was asked to be “speaker of the class” at the 20th class reunion, not Obama, who apparently did not attend the reunion. “I know that the guy who writes the class notes, who’s kind of the, as we say in New York, the macha who knows everybody, has yet to find a person, a human who ever met him. Is that not strange? It’s very strange.” Root speculates that Obama had some sort of racial “identity crisis” that precluded him from socializing with many people. “All my buddies are white, what can I tell you! They don’t know him, nobody’s ever seen him, I don’t know what to tell you.… I mean, when I went to Columbia, the black kids were all at like tables going, ‘Black power!’ We used to walk by and go, ‘What the hell are they talking about?’ And they didn’t associate with us and we didn’t associate with them. So if you track down a couple of black students, they’ll probably know him. But nobody white’s ever heard of this guy. It’s quite amazing. Nobody remembers him. They don’t remember him sitting in class.” Root finds the Obama campaign’s refusal to release Obama’s Columbia student transcript “suspicious,” and says he is willing to bet “a million dollars cash… that my GPA was better than Barack’s… and he got in [to Harvard Law School] based on the color of his skin.… He had a lower average than me and he got into Harvard and I didn’t.” Root uses the opportunity to claim that America has never been unfair to minorities; instead, he says: “It was unfair to me. A white butcher’s kid, whose father had no money, but nobody gave me a break. And do I have a chip on my shoulder? You’re damn right I do. And I represent millions and millions of poor people in this country who weren’t lucky enough to be poor and black, they were unlucky enough to be poor and white, and they can’t get into Harvard. So maybe that country Barack’s fighting for, he’s got the wrong country here. He’s been just fine in this country. The rest of us need someone to defend them.… I’m for affirmative action—I think the NBA [National Basketball Association] should be 80 percent white.” He concludes, “I don’t have a racist bone in my body.” (Root 9/5/2008; St. Petersburg Times 2/10/2011)

February 10, 2011: Fact-Check Organization: Trump’s Claims that ‘No One Knew Obama’ in College ‘Ridiculous’ and ‘Crazy’ 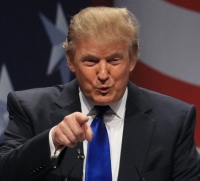 Donald Trump, addressing an audience at the 2011 Conservative Political Action Conference. [Source: Red Dog Report (.com)]Billionaire entrepeneur and television host Donald Trump tells an audience at the Conservative Political Action Conference that President Obama “came out of nowhere,” and adds: “In fact, I’ll go a step further: the people that went to school with him, they never saw him, they don’t know who he is. It’s crazy.” Trump, who receives cheers for the statement, tells the assemblage that he is considering running for president in 2012 as a Republican. He is apparently trying to revive the so-called “birther” claims that Obama is not a valid American citizen (see (see July 20, 2008, August 15, 2008, October 8-10, 2008, October 16, 2008 and After, November 10, 2008, December 3, 2008, August 1-4, 2009, May 7, 2010, Shortly Before June 28, 2010, and Around June 28, 2010). In response, PolitiFact, a non-partisan political research organization sponsored by the St. Petersburg Times, retraces Obama’s academic career: Obama attended kindergarten in Honululu, and moved with his family to Jakarta, Indonesia, in 1967, where he attended a Catholic elementary school, St. Francis Assisi Catholic, as well as Besuki Public School, until age 11. He then returned to Honolulu, where he lived with his maternal grandparents and attended a private college preparatory school, Punahou School, until he graduated with a high school diploma. In 1979, he attended Occidental College in Los Angeles, transferred to Columbia University in 1981, and graduated from that university in 1983. He later attended, and graduated from, Harvard Law School in 1991. Trump’s claims apparently center on rumors that “no one knew him” at Columbia University, fueled in part by a 2008 editorial by the Wall Street Journal (see September 11, 2008), which repeated the “finding” of a Fox News “investigation” that found 400 classmates of Obama’s had not known him at the time. Another source is Libertarian vice-presidential candidate Wayne Allyn Root, who attended Columbia at the same time as Obama and says: “I think the most dangerous thing you should know about Barack Obama is that I don’t know a single person at Columbia that knows him, and they all know me. I don’t have a classmate who ever knew Barack Obama at Columbia” (see September 5, 2008). Obama has himself said he did little socializing at Columbia, and though he had some involvement with the Black Students Organization and participated in anti-apartheid activities, spent most of his time studying: “Mostly, my years at Columbia were an intense period of study,” he has said. “When I transferred, I decided to buckle down and get serious. I spent a lot of time in the library. I didn’t socialize that much. I was like a monk.” The Journal noted a May 2008 story from the Associated Press containing an interview with Obama’s former roommate, Sohale Siddiqi, who verified Obama’s claims, and in January 2009, the New York Times published an interview with another roommate from the time, Phil Boerner, who also validated Obama’s claims of being a bookish, rather solitary student. PolitiFact interviews Cathie Currie, a professor at Adelphi University, who remembers Obama occasionally playing pick-up soccer with her and a group of friends on the lawn outside the library. She says he made an impression because of his athleticism, his maturity, and his wisdom, and she assumed that he was several years older than he actually was. “My sense of it was that he was keeping a low profile,” Currie tells the PolitiFact interviewer. “We’d ask him to go out with us for beers after soccer. He seemed like he wanted to, but then he’d step back and say, ‘Sorry, I’m going to the library.’” PolitiFact lists an array of articles covering Obama’s time at Occidental and Harvard Law School, noting that “[d]ozens of former classmates and teachers from those schools have publicly shared their recollections (and photos) of Obama. Obama was the president of the prestigious Harvard Law Review journal, for goodness sake.” PolitiFact has also found “plenty” of people who remember Obama from elementary and high school, in Indonesia and Hawaii. PolitiFact concludes: “We could get deeper into this but it seems like overkill. It’s abundantly clear that there are lots and lots of former classmates who remember Obama at every level of school. It’s true that Obama’s two years at Columbia are relatively undocumented. And far fewer classmates have publicly shared recollections of Obama from that period, as opposed to other school years before and after. At Columbia, Obama was a transfer student, he lived off campus, and by his and other accounts he buried himself in his studies and didn’t socialize much. But even so, there are several students who recall Obama at Columbia. In short, media accounts and biographies are filled with on-the-record, named classmates who remember Obama. Trump is certainly right that presidential candidates are heavily scrutinized. As even a basic online search confirms, Obama’s school years were, too. Trump’s claim that people who went to school with Obama ‘never saw him, they don’t know who he is’ is ridiculous. Or, to borrow Trump’s phrase, it’s crazy.” (St. Petersburg Times 2/10/2011; JamesJoe 2/17/2011)