This page can be viewed at http://www.historycommons.org/entity.jsp?entity=wazhma_mojaddidi_1

Wazhma Mojaddidi was a participant or observer in the following events: 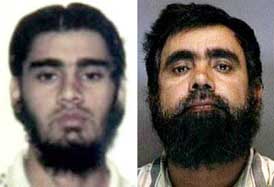 Hamid (left) and Umer Hayat [Source: ABC]Hamid Hayat, 23, a United States citizen of Pakistani descent is arrested in Lodi, California and alleged to be part of a terrorist sleeper cell. His father, Umer Hayat, a naturalized American citizen born in Pakistan, is also arrested. The indictment contains Hamid’s admission to attending an Islamist training camp in Balakot, Pakistan, in 2000 for a few days, and again in 2003-2004 for approximately three to six months. He further admits to training for jihad, that he came to the United States for jihad, and that he was prepared to wage jihad upon the receipt of orders. The indictment says that literature extolling violent Islamist activities was discovered at Hamid’s home, including a magazine from Jaish-e-Mohammed, a Pakistani extremist group. Umer is arrested for making false statements to the FBI on unrelated charges. (Department of Justice 4/25/2006) On April 19, 2003, the two, on their way to Pakistan, were stopped outside of Dulles International Airport with $28,093 in cash. They were allowed to continue with their journey. To make bail after their 2005 arrests, the Hayats put their two-house compound up on bond and declare it to be appraised at $390,000 with no outstanding debt. US District Judge Garland E. Burrell Jr. writes that Umer, an ice cream truck driver, “appears to have access to a significant amount of cash from an unexplained source.” Umer is charged with making false statements to the FBI when questioned about the cash he had at Dulles. Umer is later released and credited with time served. (Hedlund and Bishop 8/25/2005) On April 25, 2006, Hamid is convicted with one count of providing material support or resources to terrorists and three counts of making false statements to the FBI in matters related to international/domestic terrorism. The announcement of the conviction states that Hamid confessed in interviews to attending an Islamist training camp and receiving training in order to carry out attacks against the United States. The announcement further states that Hamid initially made false statements to the FBI in regards to this training, and was discovered to have been in possession of the Pakistani magazine, a “jihadi supplication,” and a “jihadi scrapbook.” The announcement indicates that the main was gathered between March 2003 and August 2003 and consists of several recorded conversations with a cooperating witness, in which Hamid “pledged his belief in violent jihad, pledged to go to a jihadi training camp and indicated that he, in fact, was going to jihadi training.” (Department of Justice 4/25/2006) Hamid will be sentenced to 24 years in prison on September 10, 2007. His defense lawyer, Wazhma Mojaddidi, says Hamid’s statements were the idle chatter of an uneducated, directionless man. She says the government has no proof her client had ever attended a terrorist training camp. Hamid says that he made the claims to end the interrogation. Umer says “We were expecting justice. We did not get justice. My son is innocent.” (KCBS 9/10/2007) The request for a new trial will be rejected by Judge Burrell on May 17, 2007. He says that there is evidence that jurors “thoroughly and thoughtfully deliberated regarding Hayat’s guilt or innocence.” He also rejects defense objections that the jury was misled by an FBI undercover witness who apparently incorrectly testified that he saw a top leader of al-Qaeda in public in Lodi. No further information is made available to the public on the source of the Hayat’s wealth. (Associated Press 5/17/2007)