This page can be viewed at http://www.historycommons.org/entity.jsp?entity=wells_morrison_1

Wells Morrison was a participant or observer in the following events: 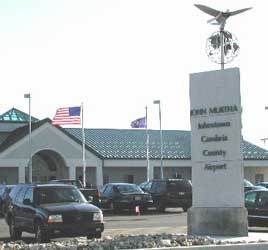 Johnstown-Cambria County Airport. [Source: JMSA Today]At some time shortly before 10 a.m.—as early as 9:40 a.m. according to one report—air traffic manager Dennis Fritz, in the control tower at Johnstown-Cambria County Airport, 70 miles east of Pittsburgh, receives a call from Cleveland Air Traffic Control reporting a large, suspicious aircraft about 20 miles south of them, descending below six thousand feet. Despite the clear day, Fritz and his colleagues can see no plane approaching through binoculars. Soon afterwards, in response to another call from Cleveland, Fritz orders trainees and custodial staff to evacuate the tower, yet he is still unable to see any plane approaching. Less than a minute later, though, Cleveland calls a third time, saying to disregard the evacuation: The plane has turned south and they have lost radar contact with it. (Silver et al. 9/12/2001; Knight Ridder 9/13/2001; Pittsburgh Post-Gazette 10/28/2001; Longman 2002, pp. 197) Wells Morrison is the agent in charge of the FBI’s Mon Valley Resident Agency, a satellite of its Pittsburgh field office. He too receives a phone call informing him of this flight, though he doesn’t say whom it is from. He contacts the Johnstown FBI office and instructs its agents to head to the Johnstown Airport. (Kashurba 2002, pp. 109-110) Flight 93 crashes around 10:03 a.m. or soon thereafter (see (10:03 a.m.-10:10 a.m.) September 11, 2001), going down in a field just 14 miles south of Johnstown. (Eggen 9/13/2001)

Wells Morrison is the supervisory special agent in charge of the FBI’s Mon Valley Resident Agency, a satellite of the bureau’s Pittsburgh field office. (Blair 4/13/2003) He receives a call informing him that a plane has crashed in Somerset County. Another phone call informs him that Westmoreland County 911 received a call saying a plane had been hijacked. (This is the call believed to have been from Flight 93 passenger Edward Felt (see 9:58 a.m. September 11, 2001).) He sends an agent out, who quickly seizes the tape of the call from the emergency dispatchers. Morrison also has agents sent to the Flight 93 crash site and subsequently goes there himself, being one of the first FBI agents to arrive at the scene. (Lane and Pan 9/12/2001; Kashurba 2002, pp. 109-110) Patrick Madigan of the Pennsylvania State Police, who arrives at the crash site around 10:20 a.m., says the first FBI agent gets there soon after him. Initially, four or five FBI agents will be there. (Department of the Army and the Air Force National Guard Bureau 2002

Flight 93’s flight data recorder, found at the crash site in Shanksville. [Source: US District Court for the Eastern District of Virginia, Alexandria Division]Around 4:50 p.m. on September 13, investigators discover the flight data recorder from Flight 93, one of the plane’s two “black boxes.” It is buried about 15 feet down in the main crater at the crash site, near Shanksville, Pennsylvania. Around 8:25 p.m. the following evening, the other ‘black box’—the plane’s cockpit voice recorder—is found about 25 feet below ground in roughly the same spot. (Gibb, O'Toole, and Lash 9/13/2001; Smith 9/15/2001; Longman 2002, pp. 217) The flight data recorder monitors airplane functions like its speed and altitude, while the cockpit voice recorder picks up conversations in the plane’s cockpit. (Silver 9/14/2001) Both are mounted in a plane’s tail. They are encased in very strong materials, like titanium, and insulated so as to withstand a crash impact. (NPA 9/15/2001) Wells Morrison, the FBI’s second in command at the Flight 93 crash scene, later comments, “It was strange. The black boxes are right next to each other on the aircraft, but one was found thirteen feet deeper into the crater than the other.… We were surprised, quite honestly, that we didn’t find them sooner.” (Kashurba 2002, pp. 109 and 115) The cockpit voice recorder is sent to the National Transportation Safety Board (NTSB) in Washington, and then on to its manufacturer, Honeywell, to try to extract information from it. (CBS News 9/16/2001; Silver 11/4/2001) It is supposedly the only one from the four hijacked flights to have survived the crash impact and ensuing fire. (9/11 Commission 7/24/2004, pp. 456) In April 2002, the 31-minute recording from it is played in private to victims’ relatives (see April 18, 2002). It will be played in public for the first time in April 2006, during the trial of Zacarias Moussaoui (see April 12, 2006). (Hirschkorn 4/13/2006)