This page can be viewed at http://www.historycommons.org/entity.jsp?entity=won_young_kim_1

Won-Young Kim was a participant or observer in the following events: 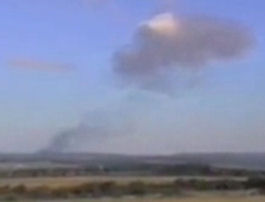 Smoke rising, minutes after Flight 93 crashes in Pennsylvania. [Source: CNN]Exactly when Flight 93 crashes is unclear. According to NORAD, Flight 93 crashes at 10:03 a.m. (North American Aerospace Defense Command 9/18/2001) The 9/11 Commission gives an exact time of 11 seconds after 10:03 a.m. It will claim this “time is supported by evidence from the staff’s radar analysis, the flight data recorder, NTSB [National Transportation Safety Board] analysis, and infrared satellite data.” It does note that “[t]he precise crash time has been the subject of some dispute.” (9/11 Commission 6/17/2004) However, a seismic study authorized by the US Army and drafted by scientists Won-Young Kim and Gerald Baum to determine when the plane crashed will conclude that the crash happened at 10:06:05 a.m. (Kim and Baum 2002

; Perlman 12/9/2002) The discrepancy is so puzzling that the Philadelphia Daily News will publish an article on the issue, titled “Three-Minute Discrepancy in Tape.” This notes that leading seismologists agree on the 10:06 a.m. time, give or take a couple of seconds. (Bunch 9/16/2002) The New York Observer will note that, in addition to the seismology study, “The FAA gives a crash time of 10:07 a.m. In addition, the New York Times, drawing on flight controllers in more than one FAA facility, put the time at 10:10 a.m. Up to a seven-minute discrepancy? In terms of an air disaster, seven minutes is close to an eternity. The way our nation has historically treated any airline tragedy is to pair up recordings from the cockpit and air traffic control and parse the timeline down to the hundredths of a second. However, as [former Inspector General of the Transportation Department] Mary Schiavo points out, ‘We don’t have an NTSB (National Transportation Safety Board) investigation here, and they ordinarily dissect the timeline to the thousandth of a second.’” (Sheehy 2/15/2004)