This page can be viewed at http://www.historycommons.org/entity.jsp?entity=yassin_omar_1

Yassin Omar was a participant or observer in the following events: 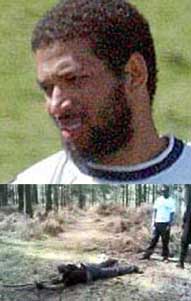 Top: training camp surveillance photo of Hussain Osman, one of the ‘copycat’ bombers. Bottom: training camp attendee practicing with a stick for a rifle. [Source: Metropolitan Police, Telegraph]On May 2, 2004, an off-duty British policeman named Paul Burke accidentally discovers a militant training camp in the Lake District region of Britain while jogging through the countryside. He sees a man shouting orders to a group of about 20 men as they line up and put backpacks on. The man leading the group is an Islamic preacher named Mohammed Hamid. A surveillance team is brought in and the training is observed and videotaped. Burke sees a similar group of men training at the same spot on May 29, and a surveillance team monitors several more days of weekend training. Muktar Ibrahim, Yassin Omar, Ramzi Mohammed, and Hussain Osman—the four men who will later go on to stage the failed 21/7 London bombings (see July 21, 2005), the attempt to copycat the 7/7 London bombings (see July 7, 2005)—are among the trainees who are monitored. They are seen conducting military type maneuvers, including training with mock rifles. MI5 records another weekend of training at the same spot in August. Muktar Ibrahim, the lead 21/7 bomber, is again monitored there. Atilla Ahmet, an imam who took over from Abu Hamza al-Masri as leader of the Finsbury Park mosque after Abu Hamza was jailed for incitement to murder, also sometimes attends the training camp. All four of the 21/7 bombers attend the Finsbury Park mosque, and two of them are photographed there—Ramzi Mohammed in January 2004 and Ibrahim in August 2004. All four are also photographed with Ahmet at some point. Hamid and Ahmet hold meetings together every Friday at Hamid’s house where they encourage new recruits to attend weekend training camps in the New Forest, the Lake District, or Scotland, and paintballing sessions in Berkshire and Kent. Head trainer Hamid and head 21/7 bomber Ibrahim are close to each other and jointly operate a stall selling Islamic literature in Oxford Street in London. In October 2004, both of them are arrested following a disturbance at their stall. Ibrahim is caught after trying to run from police. Hamid resists arrest and reportedly tells police, “I’ve got a bomb and I’m going to blow you all up.” At the police station, Hamid only identifies himself as “Osama bin London,” but a fingerprint check reveals his real name and an extensive criminal record for theft and burglary. However, Ibrahim and Hamid are merely charged and then released. Ibrahim will be stopped in December at a London airport while attempting to fly to Pakistan, and he will be recognized from the training camp surveillance photos, but he will be allowed to take his flight anyway (see December 2004). He will fail to turn up for his court hearing because he is in Pakistan, where he will study bomb making at a training camp. Authorities will not come in contact with him again until after the 21/7 bombings. Hamid will remain free after the 7/7 and 21/7 bombings and will brazenly continue leading the occasional weekend training camps. A bug will finally be placed in his house in September 2005. An undercover agent will pose as a new recruit and attend the training camp in 2006. Hamid will finally be arrested later that year. Hamid, Ahmet, and a number of their associates will be convicted of criminal activity relating to the training camp in 2008. The Telegraph will later comment, “Mohammed Hamid groomed the would-be [21/7] suicide bombers under the noses of watching police [and] security services.” (Gardham 10/17/2007; Gardham 2/27/2008; Gardham 2/27/2008; Campbell 3/8/2008) 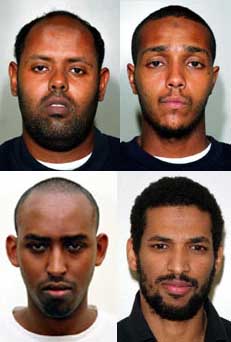 Clockwise, from top left: Muktar Ibrahim, Ramzi Mohammed, Hussain Osman, and Yassin Omar. [Source: Metropolitan Police]Four men attempt to carry out bomb attacks to disrupt part of London’s public transport system two weeks after the July 7, 2005 London bombings (see July 7, 2005). The attempted explosions occur around midday at Shepherd’s Bush, Warren Street, and Oval stations on London Underground, and on a bus in Shoreditch. A fifth bomber dumps his device without attempting to set it off. The target are three Tube trains and a bus, as on 7/7, but the devices fail to explode properly. The men are identified as Muktar Ibrahim, 29, Yassin Omar, 26, Ramzi Mohammed, 25, and Hussain Osman, 28. (BBC 7/11/2007) These events follow a period of high anxiety and alert for London’s citizens and emergency services alike. The four men, all originating in east Africa and arriving in Britain in the 1990s, stocked up on large quantities of hydrogen peroxide from hairdressing suppliers and used Omar’s flat in New Southgate as a bomb factory. The devices, designed to fit into rucksacks, were made of a hydrogen peroxide and chapatti flour mixture. The bombs all fail to explode properly and the four men subsequently escape. Police say that dozens of people could have been killed had the bombs detonated properly. The escape of the men sparks Britain’s largest manhunt in history. Mohammed and Ibrahim are captured a week later in west London. Omar is arrested in Birmingham, having disguised himself as a woman in a burka, while Osman is arrested in Rome and extradited to Britain. (BBC 7/10/2007) Two days later, another bomb of similar construction is found and detonated by police in Little Wormwood Scrubs, a park. Police say that it appears that the bomb was dumped there, rather than hidden. This prompts the search for a fifth suspect. (BBC 7/23/2005) 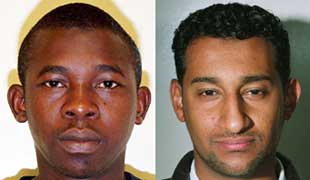 Manfo Kwaku Asiedu (left) and Adel Yahya (right). [Source: Metropolitan Police]Four men are found guilty of plotting to bomb London’s transport network on 21 July, 2005, two weeks after the 7/7 bombings (see July 21, 2005). After a six-month trial, the jury unanimously convicts Muktar Ibrahim, Yassin Omar, Ramzi Mohammed, and Hussain Osman, of conspiracy to murder. The four are sentenced to life imprisonment, with a minimum sentence of 40 years. Evidence included thousands of hours of CCTV film, as well as a suicide note left by Mohammed for his girlfriend and two children asking them to “rejoice in happiness.” The men had also been monitored attending a militant training camp in the Lake District in 2004 (see May 2-August 2004). No verdict is reached for two other men accused of being members of the conspiracy. The men, Adel Yahya and Manfo Kwaku Asiedu, face a retrial. (BBC 7/10/2007) Asiedu is said to have been the fifth bomber who abandoned his bomb at the last minute. He says he went along with the plot because he feared being killed by the others. Yahya is not accused of directly taking part in the attempted bombings, but is charged with assisting the others, for example by buying some of the bomb-making materials. (BBC 7/11/2007) Shortly before the retrial is to begin, Asiedu pleads guilty and is sentenced to 33 years in prison, while Yahya pleads guilty to a lesser charge of possessing terrorist information and is sentenced to seven years in prison. (Malvern 11/5/2007; Gardham 11/21/2007) The defendants claim that the bombs were fakes and that the plot was a protest against the war in Iraq. Prosecutor Nigel Sweeney tells the jury that the plot “had been in existence long before the events of July 7” and was not a “hastily-arranged copycat” operation. Responding to the defense, Sweeney says: “The failure of those bombs to explode owed nothing to the intention of these defendants, rather it was simply the good fortune of the traveling public that day that they were spared.” (BBC 7/10/2007) The judge, Justice Adrian Fulford, also dismisses the suggestion that the men did not intend to cause carnage. He says, “This was a viable and a very nearly successful attempt at mass murder.” (BBC 7/11/2007)