This page can be viewed at http://www.historycommons.org/entity.jsp?entity=yemeni_political_security_organization_1

Yemeni Political Security Organization (PSO) was a participant or observer in the following events:

After 1994: Foreign Services Unhappy about Closeness between Yemeni Authorities and Militants

After the Yemen civil war in 1994, in which militants helped North Yemen defeat its southern counterpart, there is an effort to absorb extremists into the mainstream (see After July 1994). However, some foreign intelligence services complain that this allows radicals to operate freely in Yemen. Nabil ad-Din, a former officer in Egypt’s state security will later say that “there were always problems” with Yemeni security officials because “they shared the same values of the people they were supposed to be arresting.” US officials will say that although some senior officers in the local Political Security Organization (PSO) take antiterrorism seriously, the organization as a whole tends to see Islamists as useful allies against domestic opponents. In addition, an Italian intelligence report will later state that the PSO even provides “logistical and intelligence assistance” to Islamic Jihad, led by Ayman al-Zawahiri, who frequently visits Yemen (see Mid-1990s-Spring 1998). (Higgins and Cullison 12/20/2002)

1996 and After: Many Yemeni Government Officials Allegedly Assist Al-Qaeda and Other Militant Groups

Many high-ranking Yemeni government officials help al-Qaeda and other militants, beginning in 1996, according to Abdulsalam Ali Abdulrahman, a Yemeni official who will be captured after 9/11 and sent to the US prison in Guanatanamo, Cuba. Abdulrahman is a section chief in Yemen’s Political Security Organization (PSO), the Yemeni equivalent of the FBI, until his arrest in 2002 (see September 2002). His 2008 Guantanamo file will state: “Detainee stated that since 1996, numerous high-ranking employees in the Yemeni government and PSO were involved in aiding al-Qaeda and other extremists through the provision of false passports and by giving them safe haven out of the country under the guise of deportation. These PSO officials included detainee; Mohammed al-Surmi, deputy chief of the PSO; Ghalib al-Qamish, director of the PSO; Colonel Ahmad Dirham, commander of the Deportation Department in the PSO; and Abdallah al-Zirka, an officer in the Yemeni Passport Authority. According to detainee, the second highest ranking person in the Yemeni government, Ali Mohsen al-Ahmar, was aware of the involvement of al-Surmi and al-Qamish in these activities since at least 1999.” An analyst notes in the file that Mohsen is the (half) brother of Yemeni President Saleh. (US Department of Defense 9/24/2008) Note that this is based on Guantanamo files leaked to the public in 2011 by the non-profit whistleblower group WikiLeaks. There are many doubts about the reliability of the information in the files (see April 24, 2011). However, it should also be noted that other information corroborates the charges, including the involvement of some names mentioned by Abdulrahman (for instance, see Spring-Summer 1998, After July 1994, December 26, 1998, and April 27, 2005). 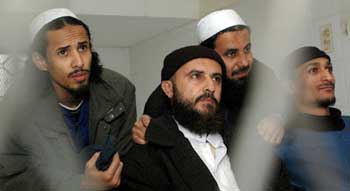 Fahad al-Quso, far left, Jamal al-Badawi, in center with black cap, and two other militants in a Yemeni prison in February 2005. [Source: Khaled Abdullah / Reuters / Corbis]Ten suspects in the USS Cole bombing escape from prison in Aden, Yemen. The suspects include al-Qaeda operatives Jamal al-Badawi and Fahad al-Quso, both thought to play important roles in the Cole bombing (see October 12, 2000). (Al-Haj 4/11/2003) All ten are recaptured in Yemen in March 2004. (New York Times 3/20/2004) After al-Badawi is recaptured, some Yemeni officials try unsuccessfully to claim a multimillion-dollar US award. Newsweek will later comment that this suggests the escape was a scam. At the time, al-Badawi apparently is friendly with Colonel Hussein al-Anzi, a top official in the Political Security Organization, Yemen’s version of the FBI. Al-Anzi will later be fired. (Hirsh, Hosenball, and Nordland 2/13/2006) Al-Quso will later be sentenced to 10 years in prison in Yemen for his role in the Cole attack, while al-Badawi will be given the death penalty. However, al-Badawi will later escape again (see February 3, 2006), then be pardoned, and then imprisoned again (see October 17-29, 2007). Al-Quso also will be secretly freed by the Yemeni government in 2007 (see May 2007). (MacFarquahar and Johnston 9/30/2004)

Jaber Elbaneh. [Source: Yahya Arhab / EPA / Corbi]Twenty-three suspected al-Qaeda operatives break out of a high-security prison in the Yemeni capital of Sana’a. Escapees include Jamal al-Badawi, wanted for a role in the bombing of the USS Cole (see October 12, 2000), and Jaber Elbaneh, a US citizen believed to be linked to the alleged al-Qaeda sleeper cell in Lackawanna, New York (see April-August 2001). The men allegedly tunnel their way from the prison to the bathroom of a neighboring mosque. However, the New York Times will later comment: “[T]hat account is viewed with great skepticism, both in the United States and in Yemen. Many in Yemen say the escape could not have taken place without assistance, whether from corrupt guards or through a higher-level plan.” (Worth 3/1/2008) The prison is located in the basement of the Political Security Organization (PSO), Yemen’s equivalent of the FBI. Several days later, a cable sent from the US embassy in Yemen notes “the lack of obvious security measures on the streets,” and concludes, “One thing is certain: PSO insiders must have been involved.” Newsweek comments: “[P]rivately, US officials say the plotters must have had serious—possibly high-level—help at the Political [Security Organization].…. [T]he head of the PSO, Ali Mutahar al-Qamish, is said to be under suspicion, according to two US officials.” (Hirsh, Hosenball, and Nordland 2/13/2006) Al-Badawi and nine others escaped a Yemeni prison in 2003 and then were recaptured one year later (see April 11, 2003-March 2004). Al-Badawi and Elbaneh turn themselves in to the Yemeni government in 2007 and then are freed (see October 17-29, 2007 and February 23, 2008).